Gender-neutral German nouns: How to be inclusive 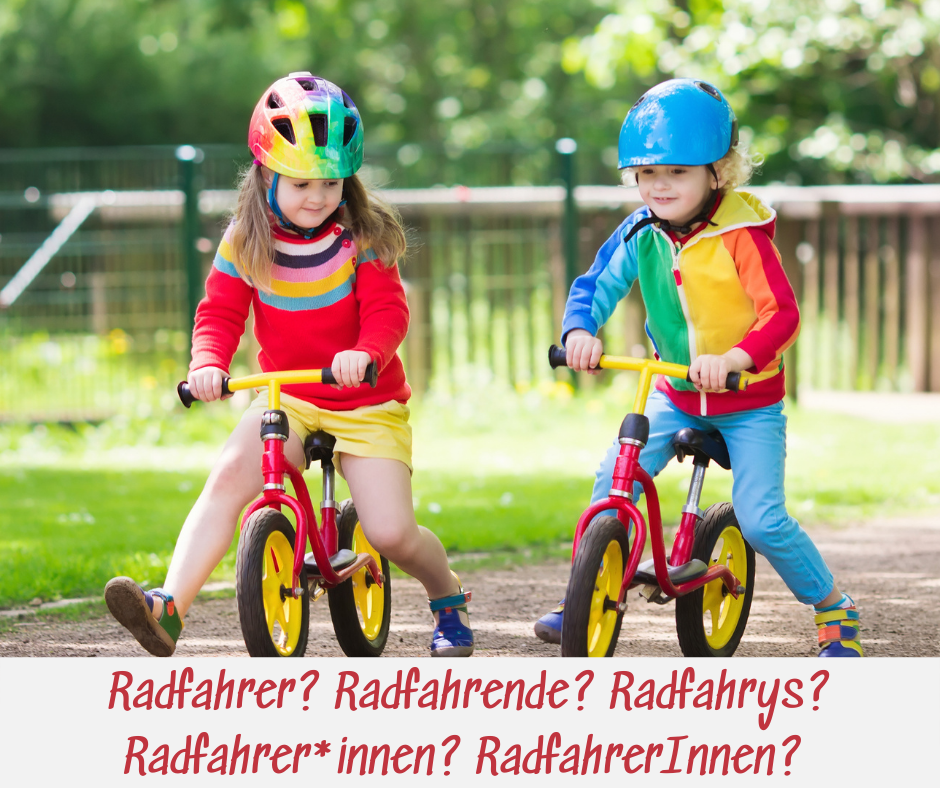 Inspired by a recent question from one of our freelance translators about inclusive / gender-neutral language in German (below—feel free to skip past it if you don’t read German), I’d like to delve into the topic of “Gendern” as it’s become known.

A little backstory and explanation for non-German-speakers: While most English nouns for job titles and the like (e.g., dentist, bus driver, writer, etc.) do not indicate the gender of the person involved—whether male, female, nonbinary, or however else they may identify—German ones specify that the person is either male or female. German usually does this by adding the ending “-in” to the word to indicate the female gender (e.g., dentist [Zahnarzt/Zahnärztin], bus driver [Busfahrer/Busfahrerin], writer [Schriftsteller/Schriftstellerin], etc.). Many societies around the world have long recognized and even celebrated the existence of people outside the gender binary, but European and Anglo societies in general are only just starting to embrace all people, and our languages are beginning to catch up—with varying degrees of success. In Sweden things have progressed enough that a new gender-neutral pronoun (hen) has been invented and entered into widespread use, as described in Swedish ‘Hen’ Is Here To Stay: The Success Of A Made-Up Gender-Neutral Pronoun. Likewise, in English, the singular “they” has been catching on for nonbinary people after centuries of use in cases where a person’s gender was unknown or irrelevant. Merriam-Webster summarizes the history and current usage nicely in Singular “They”. This issue with gendered nouns in German is similarly being taken up by those who wish to be inclusive of everyone.

While researching this topic, I found some great resources online, the most comprehensive of which was Geschickt gendern – Das Genderwörterbuch. This website is a treasure trove, featuring both a handy dictionary that “translates” gendered words into ungendered ones (Agentenfilm [male secret agent movie] becomes Spionagefilm [espionage movie], for instance) and an explanation of why this shift is so important. A section called Muss das sein?! lists four key reasons for using gender-neutral language. The first is that language influences our thinking. For example, a memo about Neue Hygienevorschriften für Erzieher in der Kita (new hygiene rules for male caregivers at daycare) could imply that only men work at the daycare, when in fact there may be twenty women and just one man. Second, inclusive language explicitly embraces women and non-binary people rather than tossing them in as an afterthought. If a job ad says, “Der Freistaat Bayern sucht Lehrer*In (Fach: Latein) für den Schuldienst” (the state of Bavaria is seeking a schoolteacher of any gender to teach Latin), female or nonbinary teachers will feel that they are also being addressed and will be encouraged to apply. Third, writing (and speaking) this way is more democratic. Making space for all genders is a way of expressing the principle of equality and the value of all people, regardless of their gender. And finally, it helps to eliminate gender role stereotypes, freeing people of all genders to follow their interests and empowering them to take on anything they choose.

As the German language evolves, different ways of handling this conundrum have developed, but no single method has emerged as the runaway favorite. Annika Wappelhorst details a number of them in her post How to Use Gender-Neutral Language in German & French. Some common options are synonyms, the Gendersternchen (gender asterisk), and the Binnen-I (internal letter I). Synonyms are often a clever solution, but they can grow unwieldy, such as when Magier (male magician) becomes Zauberkunst ausübende Person (person who practices magic). As for the Gendersternchen and Binnen-I, they work well enough, but the look of them is inelegant. My favorite of the options listed in the post is one I hadn’t heard of before: Entgendern (degendering). Here gendered noun endings are replaced with -y and the neuter article das is the only one used, supplanting the feminine die and the masculine der, so a reader would be das Lesy instead of der Leser or die Leserin. If you have a few minutes to watch a video, this science slam by Austrian linguist Thomas Kronschläger sums up Entgendern nicely: Genderneutrale Sprache? So einfach geht’s. Although this solution was introduced by performance artist Hermes Phettberg—perhaps not entirely seriously—I appreciate it for its simplicity and ease of implementation, and I would love to see it adopted more widely.

I hope I’ve been able to provide a little insight into just one of the aspects of inclusive language with this post and inspire you to check out some of the links I included. Keep an eye on this space for more on the topic in the future. As a language nerd and champion of equality, I appreciate that GLS has given me this opportunity to explore the evolution of the German language and to share that knowledge with others.

GLS is an ISO-certified translation agency that provides high-quality, accurate, and well-written German ↔︎ English translations. Learn more about what we do.